Kieron Pollard-led West Indies side has arrived in Ahmedabad for the ODI leg of the limited-overs series against India. All the ODIs are set to be played at the Narendra Modi stadium and all the T20Is will be played at the Eden Gardens in Kolkata. 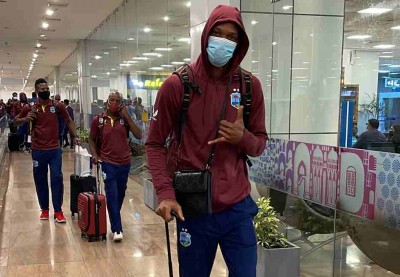 “After a long couple days of travel from Barbados, the #MenInMaroon have arrived in India,” the official handle of West Indies Cricket tweeted.

After a long couple days of travel from Barbados, the #MenInMaroon have arrived in India! ✌🏿 #INDvWI 🏏🌴 pic.twitter.com/ogvbrtQqTy

The #MenInMaroon have a quick turnaround, as WI get ready to play @BCCI in 3 ODI’s here, starting on February 6 #INDvsWI 🏏🌴 pic.twitter.com/WSHvHKoqVA

The West Indies team will undergo a mandatory quarantine of three days before stepping onto the field for the 1st ODI on 6 February.

1st ODI on the 6th of Feb will be a very special and historic match as India will be playing its 1000th ODI. The Indian team will be the first team to achieve this feat.

The Gujarat Cricket Association (GCA) on Tuesday had confirmed that the upcoming three-match ODI series between India and West Indies will be played behind closed doors.

“Considering the current situation, all the matches will be played behind the closed doors,” the official handle of Gujarat Cricket Association tweeted.

However, the T20I series which will be played in Kolkata will have a 75 percent crowd in the Eden Gardens after the Bengal Cricket Association received a green flag from the State Government.

• West Indies land in Ahmedabad for the ODI series against India.

• The ODI series will be played behind closed doors.

ALSO READ: ACCEPT AND MOVE ON: GAUTAM GAMBHIR OPENS UP ON INDIA’S SEARCH OF ‘NEXT’ KAPIL DEV

Prateek Kumar
Previous articleAccept and move on: Gautam Gambhir opens up on India’s search of ‘next’ Kapil Dev
Next articleShubhman Gill reminisces about the historic series victory down under in 2020-21