‘Who wants ball love bite like this?’ Watch Shikhar Dhawan give a cheeky take on his sore arm after the 1st ODI

Shikhar Dhawan has been a pillar of Indian cricket in the ODI format. His contribution in the last 10 years, and in especially the ICC formats can’t be argued. He is currently India’s leading run scorer in ODI’s this year and continued his dominance in the 1st ODI against Zimbabwe as well. With the help of a brilliant partnership from Shikhar Dhawan and Shubman Gill, India registered their win by 10 wickets in the first ODI of the series against Zimbabwe. The left-handed batter remained unbeaten on 81 while his partner scored an unbeaten 82 off 72 balls.

The 36-year-old hit nine boundaries but also copped a few blows in the process. He took to Instagram to share a picture of him saying, “Who wants ball love bite like this?” The picture showed him having a sore arm but it didn’t look like the batter was injured. For precaution, he might get benched in the second ODI but it looks very unlikely at the moment. 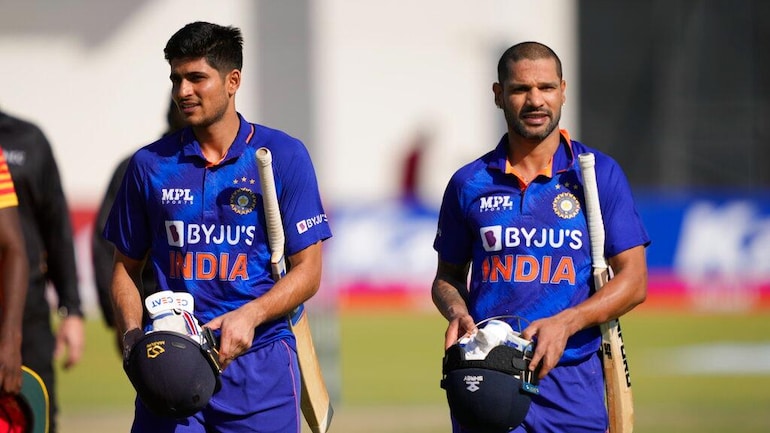 Shikhar Dhawan and Gill started opening in the West Indies ODI series. The duo have recorded three-century stands in four innings. Gill and Shikhar have scored 472 runs in just 4 innings so far. Hence, even in the presence of KL Rahul, team India decided to open with the young and experienced pair.

In the post-match press conference, the veteran was full of praise for his new opening partner. Speaking about Gill, Shikhar Dhawan said, “Shubman Gill is a tremendous batter and it’s lovely to watch him from the other end. The way he has come in and scored runs consistently, converting starts into big fifties is amazing.”

KL Rahul chose to bat in the middle order and that can be an indication of how things can be once Rohit Sharma returns.

Rahul, in the post-match press conference, said that the bowlers were disciplined with the line and length and that was the reason for getting quick wickets. He also expressed his joy in returning to the Indian team. “For a few of us, it is great to be back in the Indian dressing room. As a team, we have been in good form, good to see that all of us are getting enough game time. Feels good to be out there,” said the 30-year-old.

• Shikhar Dhawan gives a cheeky take to the blow he suffered in the 1st ODI.