On Thursday, Virat Kohli issued a statement on social media where he revealed his decision of stepping down as T20I captain post the upcoming World T20. Virat’s childhood coach Rajkumar Sharma has reacted to this development. In an interview with News agency ANI, Rajkumar Sharma said that he supported his ward’s decision. He also claims that Virat will help the future captain the same way Dhoni helped Virat. He also states that Kohli will now be more focused to win the T20 World Cup and end his captaincy on a high.

“New captain will bring new ideas and new strategies, so it will be interesting to see who is named as the skipper. Just like what Dhoni did, Virat too will like to play the same role and help the new captain. He will be more determined and focused to win the T20 World Cup as he will want to leave India’s T20I captaincy on a high.” 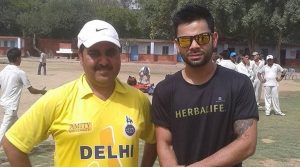 Rajkumar Sharma also disclosed that Kohli had previously discussed stepping down with him. He opined that captaining a cricket crazy nation like India in all three formats can take a toll on anyone.

“It is a thoughtful decision, he had discussed this with me also about this. Captaining in three formats does put a player under pressure and hence he decided to step down from T20I captaincy. We were discussing it as it is a big issue, I was sure about it.

Virat loves the Test format and he will want to lead India in the Test format for a longer period and ODI too hence he decided to step down from T20I captaincy to ease off the pressure,” he said.

In his statement, Virat Kohli revealed that he had discussed his decision with Head coach Ravi Shastri, BCCI officials including Secretary Jay Shah and Rohit Sharma, who is likely to be the next captain for India in T20Is.

“Of course, arriving at this decision took a lot of time. After a lot of contemplation and discussions with my close people, Ravi bhai and also Rohit, who have been an essential part of the leadership group, I’ve decided to step down as the T20 Captain after this T20 World Cup in Dubai in October.”