Virat Kohli-led team India scripted another historic test victory in 2021 as the cricketing giants breached South Africa’s fortress at Centurion. The visiting Indian side wreaked havoc to win the encounter at Supersport Park by 113 runs. 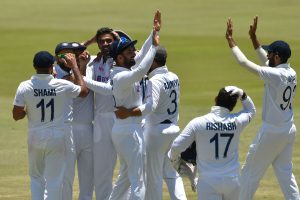 As soon as the side registered the historic win, the celebration mood of the players came upon the field and Indian skipper Virat Kohli was seen delighted too. Kohli’s family is with him on tour to the Rainbow nation and his little daughter Vamika also witnessed the ecstatic moment. In the same light, the Indian skipper could be seen waving to his little daughter. In one of the clips that started doing rounds on the internet, Kohli could be seen celebrating the victory with pumped fists while looking towards his family in the stands.

First match of vamika in the stands. Virat gesturing this to his family.
God, protect them 🧿🥺

Do it for your girls, Virat! Do it for them. 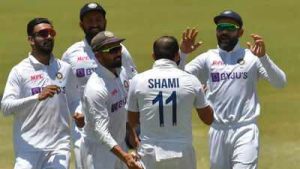 The test match was perfectly set up by Indian openers Mayank and KL Rahul who notched up a 100-run stand. Then Mohammed Shami was the chief destroyer in the second innings whose fifer restricted South Africa to a low total and helped India take a sizable lead.

Virat Kohli acknowledged the contributions of these players and claimed that if Bumrah was fit to bowl in the first innings, India would have had the advantage of 40 extra runs.

“Got off to the perfect start. Have to understand one day was washed out – shows how well we played. It’s always a difficult place to play against SA (Centurion). The discipline that the batters showed. Winning the toss, batting first overseas is a tough challenge. Credit to Mayank and KL for the way they set it up. We knew we were in pole position with anything over 300-320. Knew the bowlers will do the job. Spoke about it in the change room – the fact he didn’t bowl much in the first innings, allowed SA to get around 40 more runs (Bumrah).

“Just the way these guys bowl together has been a hallmark of our team getting a result in difficult situations. Absolutely world-class talent (Shami). For me, he’s of the best three seamers in the world at the moment. His strong wrist, his seam position, and his ability to hit a length consistently. Got so much confidence out of Johannesburg last time. It’s a ground we love playing at,” said Kohli in the post-match presentation.

• Kohli calls Shami one of the best seam bowlers in the world.

ALSO READ: 2021 WILL GO DOWN AS ONE OF THE GREATEST YEARS IN INDIAN CRICKET HISTORY: KL RAHUL

Prateek Kumar
Previous article2021 will go down as one of the greatest years in Indian cricket history: KL Rahul
Next articleTravis Head ruled out of the Sydney Test after testing Covid positive