“A Master at Work”: Watch Virat Kohli prepare for a tough English summer

Virat Kohli and his fans are dearly waiting for his 71st international century. Fans would be hoping that he finally brings an end to this drought in this English summer. Indian team is set to play one rescheduled Test from last year’s series, three T20Is, and three ODIs against England in July. The Indian team is set to play a practice game against Leicestershire on June 24. Meanwhile, former Indian skipper Virat Kohli was seen training for the upcoming red-ball encounter at Manchester.

Leicestershire club’s Twitter handles shared a glimpse of the master’s training session. They captioned the post “A master at Work” and encouraged the crowd to come and watch the Indian team’s stars at the Uptonsteel County Ground.

A master at work 🔥

You can watch @imVkohli and @BCCI’s other test superstars tomorrow at the Uptonsteel County Ground.

The Indian team is leading the postponed five-match test series by 2-1 under the leadership of Virat Kohli. Now, the leadership group and coaching staff of both teams have a new look. India will be captained by Rohit Sharma with head coach Rahul Dravid by his side. On the other hand, Ben Stokes was appointed as the new Test skipper and the England team’s coaching was handed to Brendon McCallum. 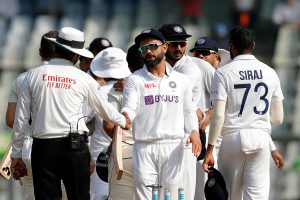 A report in the Times of India stated that former India captain Virat Kohli was struck by the virus after arriving in London a few days ago.  “Yes, Virat too was hit by Covid after returning from holidaying in the Maldives, but he’s recovered now,” a source was quoted as saying.

“This now means that India’s tour game against Leicestershire from June 24 won’t be as intense as coach Rahul Dravid wanted it to be, since the medical advice is to not overload the players after they’ve suffered Covid-19. There could be more Covid cases in the team,” the source further stated. Virat Kohli recovering from Covid is surely a good sign for the Indian team who are already leading the five-match Test series 2-1.

A few days ago, several media reports claimed that ace spinner Ravichandran Ashwin missed out on the flight to England after returning a positive test. It is been learned that Ashwin will soon join the squad in London. New travel arrangements are being made for the veteran cricketer and he should be with the rest of his teammates soon.