Suryakumar Yadav, who is turning out to be a mainstay in India’s T20I squad, took India over the line in the first T20I vs West Indies after the home team lost wickets in quick succession which made the chase of 158 quite tricky. SKY credited the positive approach of Venkatesh Iyer and Rohit Sharma as the positive energy rubbed onto him during the chase.

Talking about Iyer, Suryakumar said that Iyer’s positivity led to a perfect platform for both of them to finish the game.

“I think when Venkatesh Iyer came into bat, the way he came to bat, his positivity was completely different, that passed onto me. He started his innings with a boundary, I felt it was the perfect platform for both of us to finish the game,” said Suryakumar while replying to an ANI query during a virtual press conference. When asked about Rohit Sharma’s positive approach to batting, the right-handed batter said: “The entire world is watching how he is a class player. He has played for many years for India, he is just batting in the same manner he always has. When he bats in the powerplay, if his timing is right then he tries to accumulate as many runs as he can in the first six overs.”

It was very important for me to stay till the end: Suryakumar Yadav

Suryakumar Yadav has played numerous match-winning innings for Mumbai Indians in the IPL. However, for the Indian team, he is playing a different role that is to finish the innings. He used to do this for his former IPL team Kolkata Knight Riders but that was quite a while ago.

After the innings, SKY opened up and said that it was important for him to finish the innings and play till the end.

“I think it was very important for me to stay till the end and win the game for my side. I have been in these situations many times, I used to get out earlier, and then I used to feel bad. I think the situation was perfect and I just needed to raise my hand and bail the side out. It happened, very happy to be on the winning side.”

SKY also credited Bishnoi, who picked up Player of the Match in his debut T20I game. Ravi Bishnoi finished with figures of 2 for 17 in his four overs. 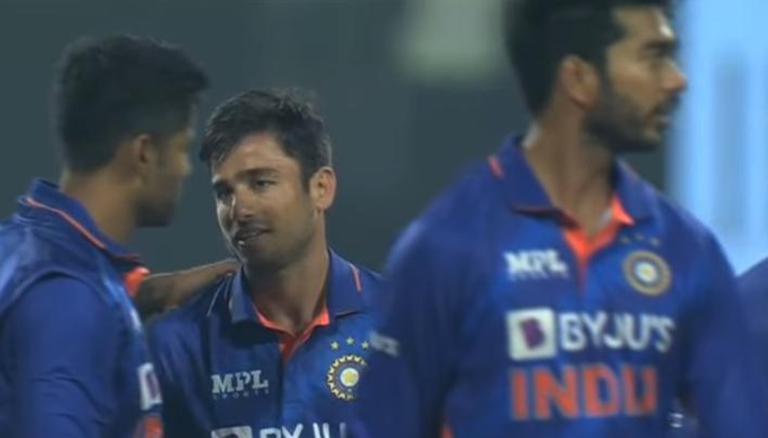 “It was a good opportunity for Bishnoi to be playing against one of the best teams in T20I cricket, he responded really well, the way he bowled and backed himself, there was dew and it was not easy for spinners to grip the ball. He executed everything really well, when he was under pressure, he came back with his best ball. I think it was a perfect debut for Ravi Bishnoi and I am very happy for him,” said Suryakumar Yadav.

Earlier, Nicholas Pooran starred with the bat as he played a knock of 61 runs to help West Indies post 157/7. Quality knocks by Rohit Sharma (40), Suryakumar Yadav (34*), and Venkatesh Iyer (24*) ensured that India register a six-wicket win with seven balls to spare.

• Suryakumar credits Rohit and Iyer’s positive attitude for the win in the 1st T20I vs WI.

• SKY played an unbeaten knock of 34* to ensure India’s win.