Watch: Shikhar Dhawan’s cheeky response to a fan asking for his shirt during the 3rd ODI against Zimbabwe

Shikhar Dhawan is known to be an animated character on the field and entertains the audience with his antics. Dhawan is currently in Zimbabwe for a three-match ODI series and the southpaw continued to entertain the fans, this time from the dressing room. When Shikhar Dhawan walked out to open the innings for India in the third ODI against Zimbabwe at the Harare Sports Club on Monday, there was something odd about his jersey. The back of Dhawan’s shirt where the name of the player is mentioned was taped up by one of the support staff members. Dhawan had worn Shardul Thakur’s jersey which was covered as soon as he came out to bat. 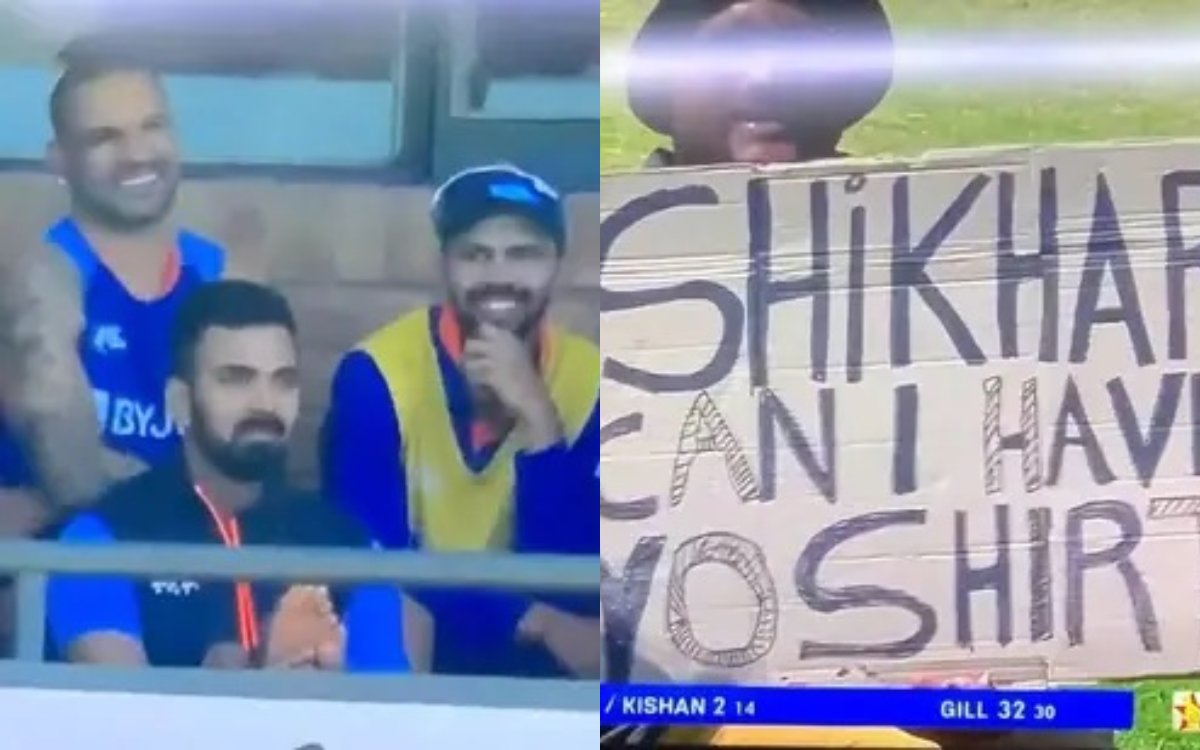 Why Dhawan didn’t put on his own jersey is not known but what we do know is that a fan in attendance of the match really wanted it. He put up a placard which read: ‘Shikhar, Can I have your shirt?’ The incident took place in the 27th over of the Indian innings, when Dhawan had gotten out and was relaxing with KL Rahul, Ruturaj Gaikwad and Avesh Khan in one of the stands, watching Ishan Kishan, Shubman Gill takes the team forward.

However, the camera once again panned towards the fan, who kept waving his placard in front of the camera, something which Dhawan took notice of. Reacting to it, Dhawan almost took the shirt, which he was wearing, off before putting it back on, which made him and the rest of the teammates next to him break down in laughter. “Get along, Shikhar. Make a donation,” renowned sports presenter and commentator Alan Wilkins said on air.

Shikhar Dhawan fell for a well-made 40 before he was out caught by Sean Williams off the bowling of Brad Evans. Dhawan, closing the face of his bat towards mid-wicket, was squared up and offered a leading edge. Dhawan had looked in good nick, striking five fours off 68 balls before perishing. After India captain KL Rahul won the toss and opted to bat, he and Dhawan put on 63 runs for the opening wicket before the skipper was cleaned up by Evans for 30.

From there on, youngsters Shubman Gill and Ishan Kishan brought India back into the game. Gill scored his maiden hundred and Kishan brought up a fifty as India powered their way to 289.

• Shikhar Dhawan reacts to a fan asking for his shirt in the 3rd ODI.
• Dhawan had worn Shardul Thakur’s shirt when he went out to bat in the match.

Mayank Agarwal is set to be sacked as PBKS captain ahead of IPL 2023; England’s premier batter in line to replace him

Prateek Kumar
Previous article
Mayank Agarwal is set to be sacked as PBKS captain ahead of IPL 2023; England’s premier batter in line to replace him
Next article
Watch: Virat Kohli leaves for UAE ahead of the Asia Cup 2022