Shardul Thakur opens up on his successful tour of England

The fate of the fifth and cancelled test in Manchester is yet to be decided by ICC. However, India leads the five match test series against England 2-1. This is the first time in nearly forty years that India won two tests in England. There were many heroes in the Indian team’s triumph in England. One of which is Shardul Thakur. 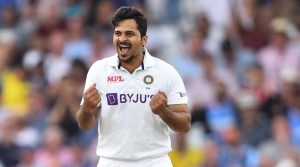 Thakur has emerged as a fan favorite after his heroics in Gabba. He took seven wickets and scored a valuable fifty. Then he took wickets at crucial stages in the white ball series against England at home. Shardul also earned the nickname “Lord” from the fans.

However, Shardul didn’t stop there. He continued his rich form in the high octane series against England. India was travelling without a well established fast bowling all-rounder. But Shardul and the management knew that he had the ability to contribute with the willow.

Shardul did exactly that and scored two crucial fifties in India’s historic win at the Oval. He also took key wickets at crucial stages. Shardul was able to fox England’s best batsman Joe Root on two out of the four occasions.

Shardul Thakur reveals who helped him improve his batting In a chat with ‘The Indian Express’, Shardul Thakur revealed that Kohli, Rohit and Dhoni played a crucial part in improving his batting and motivating him to do well.

“There have been people from the Indian team management, Virat, Rohit, who kept on motivating me. They all said that whenever I bat, I should think the way a batsman thinks.

Once I was in Mahi bhai’s (Mahendra Singh Dhoni) room and holding his bat. He told me that my batting grip is too high and I need to hold it lower to get better control over the shot. Now I hold my bat there and it helps.”

He also thanked throwdown specialists Raghu and Nuwan, who worked with Shardul in the nets and helped him improve his footwork.

Shardul reveals the reason behind his confidence in his batting 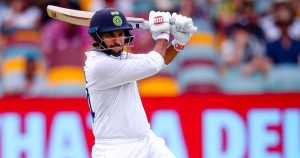 Shardul Thakur is confident in his batting ability as he keeps things simple. He doesn’t let thoughts hamper his mind and just tries to play straight.

“I don’t think too much when I walk out to bat. I just keep things simple. Since my school days, my coach (Dinesh) Lad Sir used to tell me that the more we think, the more things get complicated. So just try to play straight.”

“For the past five years I have tried to simplify my batting. There are small things I want to follow, like try to be in a good position when I’m playing my shot. The more one plays straight, going ahead in the innings, playing cross batted shots becomes easier.”

“I didn’t get to play in the World Test Championship (against New Zealand), but I had been preparing for playing against England since then. I played the first Test in Trent Bridge, did well with the ball but got out early while batting. It can happen to anyone. I was practicing in the nets and putting in the effort with both batting and bowling. Then I had niggle and knew I won’t be playing next game. Overall though it was a good tour for me.”

Prateek Kumar
Previous articleIshan Kishan goes through an intense wicketkeeping session with Parthiv Patel.
Next articleGreat players in the modern era who have not played in IPL