“Getting started in 3..2..1,” Rohit Sharma begins preparation for the South Africa tour

Rohit Sharma, India’s newly appointed ODI captain, has been getting extra responsibilities on his shoulders since Team India’s early exit in the T20 World Cup. First, he was given the leadership position for Team India in the T20 format. Then, selectors appointed Rohit Sharma as India’s new ODI captain, making him India’s captain in the white-ball format. Now, he has replaced Ajinkya Rahane as the vice-captain of the Indian test team. 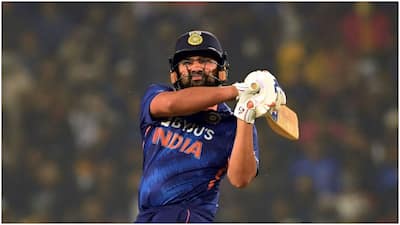 Rohit Sharma gets in his groove for the ultimate test series The newly appointed vice-captain has begun his preparation for India’s tour of South Africa which will begin on Boxing day. Rohit Sharma on Friday began his preparations with a training session in Mumbai Friday. The 34-year old Sharma took to social media to share a video clip in which he can be seen working with throw-down specialists on a pitch full of pace and bounce.

The hitman is getting his focus back to test cricket after a long T20 summer. “Getting started in 3..2..1,” wrote Rohit on Instagram.

In 2021, Rohit has undoubtedly been India’s best batter. He scored two fifty-plus scores in Australia and then followed it by being the highest run-scorer for India against England in the Test series played in India early this year.

But the overseas series in England established Rohit Sharma as a test batter. He consistently gave team India a good start along with KL Rahul. Also, Rohit’s hundred at the Oval is the highlight of his Test career. He ended up as India’s leading run-scorer in this series as well.

India’s senior players return for the tests against South Africa Meanwhile, Mohammed Shami also returned to the nets at the National Cricket Academy where he can be seen getting a few overs under his belt. He was rested from the recently-concluded home series against New Zealand along with fellow pacer Jasprit Bumrah. Rishabh Pant and KL Rahul have also returned to the Test squad. However, Jadeja, Gill, and Axar have been ruled out due to injuries.

The Indian team is yet to beat South Africa in South Africa in Test matches. In fact, it is the only frontier left for the Indian test team which is unconquered. Virat and his men would like to establish their dominance and prove that they truly are the best traveling team.

• Rohit Sharma begins his preparation for the Indian tour.