The Indian wicketkeeper-batter Rishabh Pant is playing for Leicestershire in the ongoing warm-up game against India. He came up with a heartwarming gesture to win the hearts of young fans at the Uptonsteel Cricket Ground in Leicester. The ground announcer said Indian players won’t sign autographs or take selfies with fans during the warm-up game. However, Rishabh Pant did the exact opposite as he was busy signing autographs and taking a group picture during the break.

Rishabh Pant was seen signing autographs for the young fans 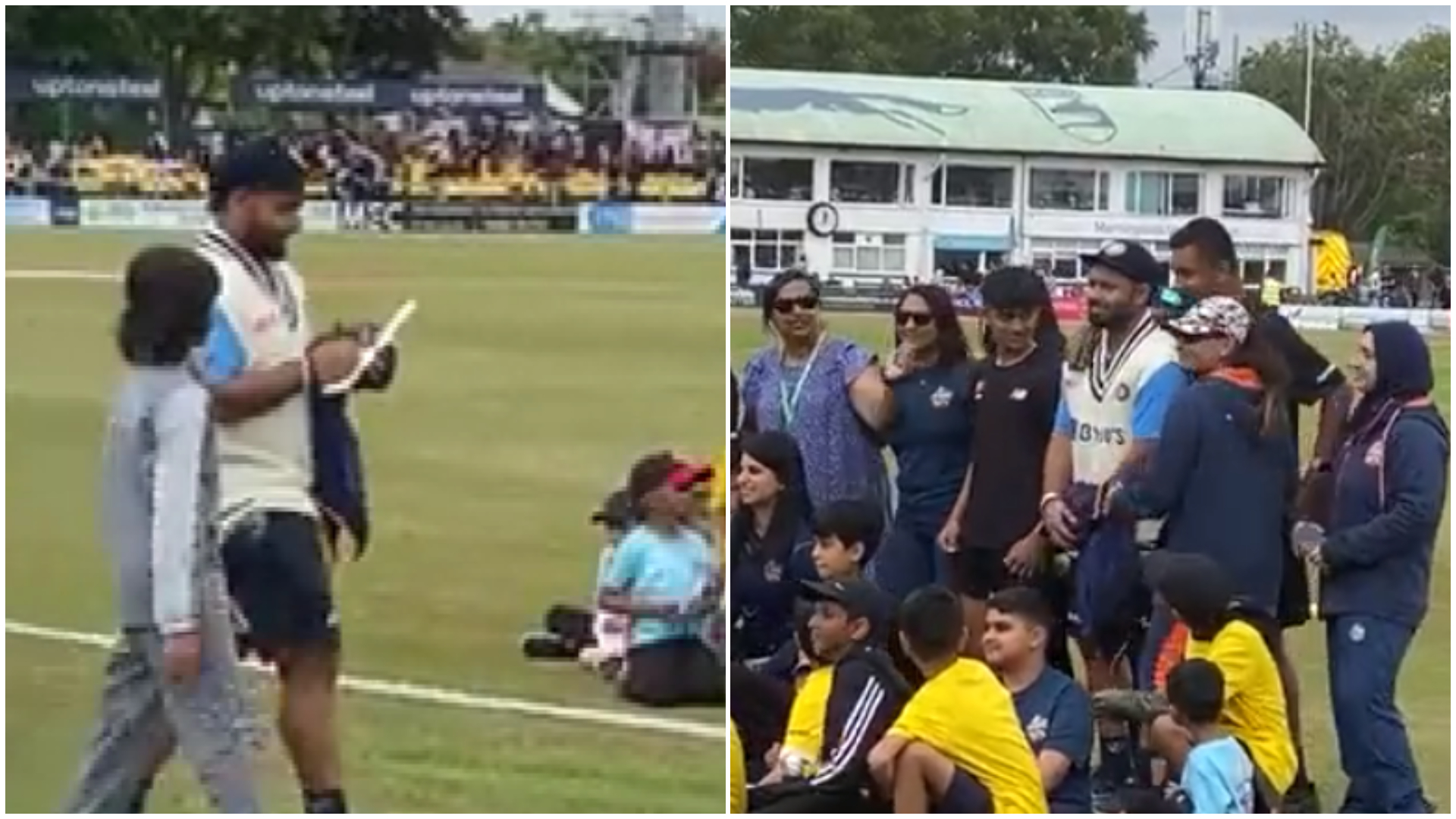 The video clip of the incident surfaced on social media and Pant was seen enjoying a great time with the kids at the Uptonsteel Cricket Ground in Leicester. You can check out the video clip below:

Ground announcer at the #IndiaTourMatch: “During the course of #LEIvIND, India’s players will not be signing autographs or taking selfies with any fans.”

In the warm-up game, Rishabh Pant smashed a blistering half-century while batting for the hosts in the warm-up game. He teamed up with Rishi Patel and helped his side transcend the triple-figure mark. The 58-run partnership between Pant and Patel was broken as the Indian pacer Mohammed Shami struck for the third time to dismiss Patel at 34.

Pant then got support from Roman Walker, who put on a 70-run partnership with the Indian. Pant was eventually sent back by Ravindra Jadeja for 76. His knock comprised 14 fours and one six.

Rishabh Pant recently led the side in the five-match series against South Africa that ended in a 2-2 stalemate. He managed to tally a mere 58 runs in the five innings which raised concerns for his place in the side.

The Rohit Sharma-led side arrived in England last week and have been preparing for the marquee clash. Recently, a video clip on social media showed the players sweating it out in the nets ahead of the huge match. Rohit Sharma recently penned down a heartfelt note after completing 15 years in international cricket. However, he is likely to miss the rescheduled test after testing COVID-19 positive.

There will be some notable members missing from the one-off Test. Indian batting ace KL Rahul who is out with an injury, and potentially Ravichandran Ashwin, who recently contracted COVID-19. The fifth Test of the series against England, which India lead 2-1, at Old Trafford could not be played due to an outbreak of COVID-19 cases within the visitors’ camp.

India will also play three T20Is and three ODIs on the tour apart from the Test match. The clash against the Three Lions at Edgbaston in Birmingham is set to start on July 1.