The Indian women’s cricket team stitched their names in the Commonwealth history books as they grabbed the silver medal in cricket’s first appearance in the prestigious event. Skipper Harmanpreet played a brave knock of 65 runs but was unable to save India from the hands of defeat as Australia won the match by nine runs to clinch the Commonwealth Games 2022 title. 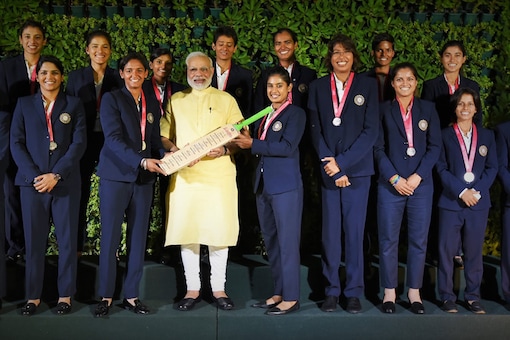 A week after achieving this feat, the Indian women’s cricket team met PM Narendra Modi at his residence on Saturday. The interaction was part of the felicitation of the Indian contingent for the Commonwealth Games 2022 by PM Modi.

The Honourable Prime Minister of India Shri @narendramodi met #TeamIndia and other Indian athletes at his residence and congratulated them for their performance at the Commonwealth Games 2022. pic.twitter.com/YxGHE881rg

Prime Minister Narendra Modi on Saturday hosted the Commonwealth Games 2022 Indian contingent at his residence and praised the contribution of the athletes in making the country proud.

“It’s quite important to receive motivation from the country’s PM. When PM Modi speaks with us, it feels like the entire country is supporting us & that everybody is appreciating our hard work. It’s a big achievement for our cricket team,” Harmanpreet Kaur told ANI.

India finished 4th in the medal tally winning a total of 61 medals at the CWG 2022, including 22 gold medals, 16 silver and 23 bronze medals.

• The Women in Blue recently won the silver medal in the recently completed CWG 2022.

Jaddu will not give you many wickets: Aakash Chopra feels Jadeja is an ineffective bowler in T20s

Prateek Kumar
Previous article
Jaddu will not give you many wickets: Aakash Chopra feels Jadeja is an ineffective bowler in T20s
Next article
Breaking: Ravindra Jadeja set to part ways with CSK; official confirmation expected soon