Royal Challengers Bangalore (RCB) and Punjab Kings (PBKS) will face off in the evening encounter on a super Sunday. Both teams will field a new skipper in the DY Patil Stadium, where the final of the inaugural IPL was played.

For the first time since 2013, RCB will be led by someone other than Virat Kohli, who stepped down from the role last year. RCB roped in Faf du Plessis, former South African captain, as their new leader. However, Faf will miss the likes of Glenn Maxwell and Josh Hazelwood during the start of the tournament.

Despite missing their two key players, RCB will look to their backups in David Willey and Finn Allen to step up in their absence. RCB will miss their premier spinner Yuzi Chahal but Sri Lankan Wanindu Hasaranga would look to fill that void. Their fast bowling also looks potent with the likes of Harshal Patel and Siraj leading their attacks. The key to RCB’s success will depend on the performance of their middle and lower-middle order.

Punjab will be led by a new skipper Mayank Agarwal, who was retained by the franchise. Punjab has one of the most potent batting lineups in the league with the likes of Shikhar Dhawan, Jonny Bairstow, Liam Livingstone, and Shah Rukh Khan. However, Jonny Bairstow is set to miss the start of the league as he is in West Indies for the test series.

A major concern for Punjab is their bowling. They are heavily reliant on Indian talents in Arshdeep, Ishan Porel, and Sandeep Sharma. They are missing a big name in their fast bowling lineup who can lead the attack. Their spin attack will be led by leggie Rahul Chahar, who failed miserably for Mumbai and the Indian team last year despite getting major chances. 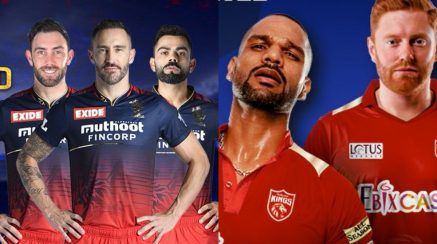 RCB will start as favorites despite missing some key players as they have a more potent bowling force in comparison to Punjab. Punjab heavily relies on their batting and it would be interesting to see how they go against a quality bowling lineup of RCB which consists of Harshal, Hasaranga, and Siraj.