Ruturaj and Bravo got us more than what we expected: MS Dhoni

MS Dhoni led Chennai Super Kings defeated the defending Champions Mumbai Indians in the opening encounter of the second leg of IPL. MS Dhoni credited Ruturaj Gaikwad and Bravo for getting them to s safe total after a horrendous start.

Mumbai Indians were off to a super start with the ball as they took 4 wickets in the powerplay. CSK were essentially 5 wickets down as Rayudu walked back to the pavilion after sustaining an injury.

However, Ruturaj Gaikwad stitched a partnership with Jadeja and DJ Bravo to take CSK to a safe total of 156. Gaikwad struck 9 fours and 4 sixes in his innings. In his 88 runs, Gaikwad played proper cricketing shorts with no risk and batted till the end. The big hits at the end from veteran DJ Bravo powered CSK past 150.

MS Dhoni praised the duo’s performance. He felt that crossing 150 after a terrible start was ‘tremendous’. “I think at 30/4, you want to get something respectable on the board and Ruturaj and Bravo got us more than what we expected. We had to bat exceptionally to get to 140, but to get to 160 was tremendous,” said Dhoni after the match.

Speaking about the wicket, MS said that it was two paced and slow to start in the beginning. According to Dhoni, this was also the reason why CSK lost wickets in the beginning,

“The wicket was slightly two-paced and slow to start off with. Most of them got out to the slowness. If you come later and you want to go hard and that’s why we lost wickets. I would have tried to get into the eighth or ninth over and then take it from there. You always think you could have gone harder earlier, but with wickets down, it was a risk.”

Pollard did not find any fault in the pitch and blamed poor batting for the reason of defeat. MI lost wickets at regular intervals and none of the batsmen took responsibility for batting till the end. 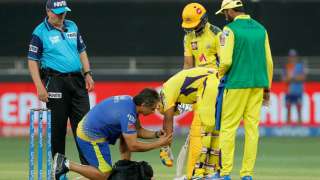 In the fourth over, a sharp inswinging short ball from Adam Milne struck Ambati Rayudu’s elbow. As a result Rayudu had to walk back to the pavilion. Rayudu did not come to bat later and he didn’t even take on the field.

MS Dhoni revealed that was fine. He was smiling which means he hasn’t broken his arm. CSK’s next encounter will be on 24th September, so Rayudu has four days which can help him.

“Rayudu was smiling, so he hasn’t broken his arm. He has four days now and that should help him.”

ALSO READ: IPL 2021: MAHELA JAYAWARDENE CONFIRMS THAT ROHIT SHARMA WILL BE AVAILABLE FOR MI’S NEXT ENCOUNTER

Prateek Kumar
Previous articleMahela Jayawardene confirms that Rohit Sharma will be available for MI’s next encounter
Next articleIPL 2021: Ambati Rayudu’s X-Ray report revealed, should be available against RCB