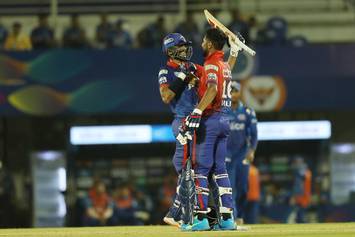 Delhi Capitals (DC) recorded a memorable win over five-time champions Mumbai Indians (MI) in their opening encounter. Mumbai Indians continued their record of losing the first game of the tournament. Deficient DC overpower MI by 4 wickets at the Brabourne stadium

Delhi Captain Rishabh Pant won the toss and elected to field first. DC, who are hit by availability issues, played with just two overseas players. MI openers Rohit Sharma and Ishan Kishan started aggressively as they notched up a fifty-run stand in quick fashion. However, the partnership was broken by left-arm leg spinner Kuldeep Yadav as he removed Rohit Sharma and then Anmolpreet Singh in quick succession. Kuldeep then went on to dismiss Kieron Pollard and finished as FC’s most successful bowler.

For MI, their most expensive buy Ishan Kishan proved his worth as he smashed 81 unbeaten runs which included 11 fours and 2 sixes. MI finished strong and posted 177 on the board.

Chasing the competitive total, DC had a terrible start as they lost three wickets in the powerplay. They further lost the plot as they lost Shaw and Powell in quickly inside 10 overs. However, quick runs from Thakur and a game-changing partnership between Axar Patel and Lalit Yadav took Delhi over the line from a tough position.

Lalit Yadav scored his highest IPL score, 48, and Axar Patel’s blistering knock of 38 of just 17 balls proved to be the difference between the two teams. Kuldeep Yadav was awarded Player of the Match for his match-winning figures of 3 for 18 in four overs.