After 70 games and nearly 60 days of nonstop cricket, we have finally arrived at the IPL playoffs week which is without a doubt the most important week of the tournament. The playoffs week is scheduled to be played from May 24 to 29. As MI and CSK crashed out of the tournament, for the first time since 2016, IPL is set to have new champions. However, there is a chance that rain may play spoilsport in the playoffs given the weather conditions prevailing in Kolkata. But to negate the impact of weather on the result, IPL has a Reserve Day rule with the other being the Super Overs rule.

What is the Super Overs rule for IPL 2022 playoffs? 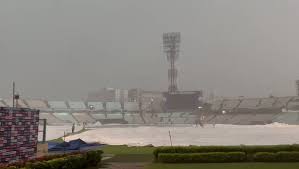 A Super Over will be played to decide the eventual outcome of the playoffs and the final should any of the games be disrupted by the weather and no play is possible in regulation time. Meanwhile, it also needs to be noted that if the ground conditions are not in a position and are unplayable to conduct any of these matches then, the final result will be decided by looking at where the teams are placed in the league standings.

For instance, if the Qualifier 1 between GT and RR cannot be played due to inclement weather conditions, the Gujarat Titans will advance to the final since they are the table-toppers.

Should there be no possibility of scheduling the playoff games in a “five-over match to complete by the end of the extra time on an original day, the teams will, if conditions permit, play a Super Over to determine the winner of the relevant Eliminator or Qualifier match,” the IPL guidelines state. In such a scenario as per the guidelines, the Super Over must begin at 12.50 am to wrap up these matches.

The final on May 29 is an 8 PM start which is half an hour late than the initially scheduled time. However, unlike the playoffs, there is a reserve day for the summit clash which is May 30. If things do go down to the Super Overs, it also needs to be ensured that the pitch and ground must be ready for play so that the Super Over can start at the latest within the stipulated time.

• IPL playoffs are set to be played in Kolkata and Ahmedabad.

• If rain interrupts play, the winner will be decided via the Super Overs rule.

ALSO READ: 5 PLAYERS WHO MIGHT RECEIVE THEIR MAIDEN INDIAN CAP IN THE UPCOMING INTERNATIONAL CALENDAR