IPL teams to practice at five venues in Mumbai

The BCCI has made arrangements for practice grounds ground for the IPL teams at five practice venues in Mumbai for the league stage of IPL 2022. These venues are the Mumbai Cricket Association (MCA) ground in Bandra-Kurla Complex, the Brabourne Stadium at the Cricket Club of India, DY Patil Stadium, the Reliance Corporate Park in Navi Mumbai, and the MCA ground in Thane.

The 15th edition of the IPL is set to become a ten-team affair and will get underway on March 26 with the clash between Chennai Super Kings and Kolkata Knight Riders at the Wankhede Stadium, and end on May 22 (Sunday). The tournament will have 12 double-headers in the league this time.

The entire IPL is staged in Maharashtra this time to eliminate air travel which increases the risk of catching COVID-19. Each team will play four matches at the Wankhede Stadium, three at CCI, four at DY Patil Stadium, and three at the MCA ground in Pune.

Each team will be based in a separate hotel to ensure that the bio-secure environment is created and maintained at each of the hotels with “dedicated areas” for the teams. A green corridor will be created for the teams to ensure a “safe passage and smooth movement” of the 10 teams for matches and practice. 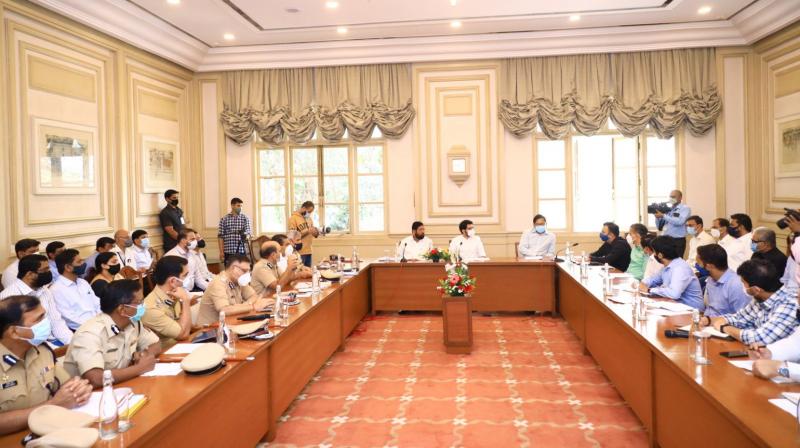 On Wednesday, Aaditya Thackeray, who is the minister for tourism and environment in the state government, and Maharashtra guardian minister Eknath Shinde held a meeting with BCCI’s acting CEO Hemang Amin and key officials of the Mumbai Cricket Association regarding the arrangements for the tournament. The meeting was held at the Sahyadri Guest House in Malabar Hill.

“To ensure the smooth flow of the @IPL, Minister @mieknathshindeji and I conducted a joint meeting of IPL, @BCCI with officers of Police and Municipal Corporations of Mumbai, Thane, Navi Mumbai,” Thackeray tweeted later.

In another couple of tweets, he wrote: “For Pune, the meeting will be held soon, proposed to be chaired by DCM sir to ensure that the tournament is successfully carried out in all our city venues.

“IPL coming to Maharashtra ensures that the games aren’t played overseas. This is a huge boost for the country, as well as Maharashtra in terms of economy, morale, and for the passion of cricket fans.”

• BCCI officials meet Aditya Thackeray for a discussion over IPL.

ALSO READ: RAVICHANDRAN ASHWIN HITS BACK AT THE CRITICS WHO QUESTION THE LENGTH OF THE IPL

Prateek Kumar
Previous articleRavichandran Ashwin hits back at the critics who question the length of the IPL
Next articleBCCI to hire new physio, trainers, and rehab specialists for NCA and Team India