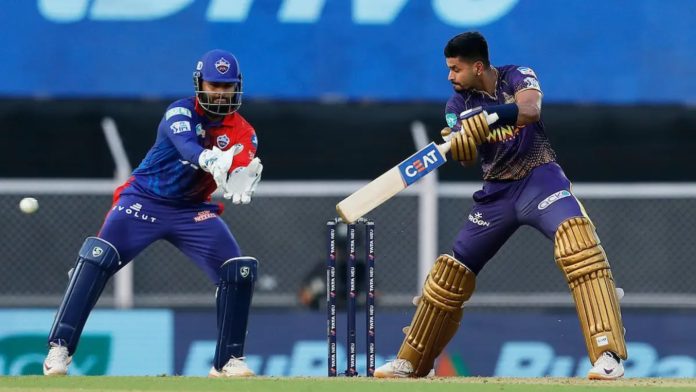 Delhi Capitals(DC) will face Kolkata Knight Riders(KKR) in the 41th match of the Indian Premier League(IPL) on Thursday, April 28 at the Wankhede Stadium in Mumbai.

The Rishabh Pant-led side is coming off a tough loss against the Rajasthan Royals in their previous encounter and their campaign so far has been on and off. They are currently at the seventh position in the points table with three wins in seven games. DC lost their last game against Royals by 15 runs. Rishabh Pant and Rovman Powell smashed 44 runs and 36 runs respectively for Delhi Capitals in that game.

On the other hand, the Kolkata Knight Riders have been on a losing streak in the last four games and they are desperate for a win in the upcoming games. The Shreyas Iyer-led side has struggled to put out their best playing XI and the top order hasn’t been able to produce good opening stands which have been a concern for a long time now. Ajinkya Rahane might get another go with Venkatesh Iyer struggling to get runs.

Shreyas Iyer has been the top run-scorer for the Kolkata Knight Riders this season but he has lacked consistency at times, which has been a concern for the side. The right-hander was dismissed for a 15-ball 12 in the previous game and he can play match-winning knocks. It is to be seen if he can deliver it on the pitch.

There are no favorites or underdogs in the contest and odds are even at 1.90, meaning if you bet ₹100 on them and if they win the match, you’ll be making ₹190

Wankhede Stadium has been a high-scoring wicket in the last few games and the short boundaries have allowed the batters to take on the bowlers tactically. Delhi Capitals could edge past Kolkata Knight Riders despite their disappointing loss in the last game.

Prediction: DC to win the match.