India’s women’s team started off their World Cup 2022 campaign on a stellar note as they defeated arch-rivals Pakistan by a massive margin of 107 runs on Sunday. Indian Women team maintained their 100% win record against Pakistan in World Cups. India has beaten Pakistan on all four occasions when they have faced off in the mega event. 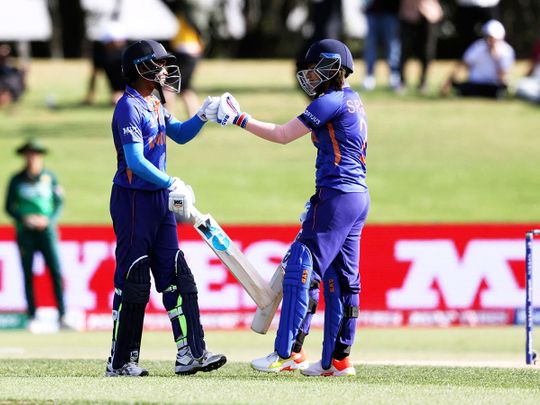 Indian skipper Mithali Raj won the toss and elected to bat first in a high-pressure game. India was under pressure after opener Shafali Verma was dismissed for a duck. A 92-run stand between Mandhana (52 off 75) and Deepti Sharma (40) helped steady the ship. However, India suffered a mini-collapse as they lost 6 wickets in a span of 18 runs.

Then Sneh Rana and Pooja Vastrakar rescued India with a 122 run stand. Sneh Rana was unbeaten for her 53 runs while Vastrakar scored 67 critical runs at a 100+ strike rate. Thanks to the duo’s partnership, the Indian team posted a respectable total of 244 in 50 overs.

Indian bowlers defended the competitive total by bowling tight lines and not allowing the Pakistani women to score runs. Jhulan Goswami and Sneh Rana claimed two wickets each while Rajeshwari Gayakwad proved to be the most lethal bowler with four in her quota of 10 overs.

Pakistan never looked like they were in the game as they eventually lost all wickets for 137. Pooja Vastrakar was awarded the Player of the Match for her quickfire fifty which came batting at number 8. India’s next encounter will be against the hosts New Zealand on 10th March.

• Indian Women’s team defeat Pakistan in their opening encounter in the World Cup 2022.

• Pooja Vastrakar was awarded the Player of the Match for her quickfire fifty.

ALSO READ: RAVINDRA JADEJA’S ALL-AROUND MAGIC GUIDES INDIA TO A MAMMOTH VICTORY BY AN INNING AND 222 RUNS IN THE 1ST TEST

Prateek Kumar
Previous article
Ravindra Jadeja’s all-round magic guides India to a mammoth victory by an inning and 222 runs in the 1st Test
Next article
WATCH: Virat Kohli gifts his jersey to a fan after his 100th Test