Hardik Pandya is a critical member of the Indian limited overs set up. When he is fully fit, he provides the Indian team a much needed balance. He can give his side crucial overs with the ball and can destroy the opposition with the bat. However, he hasn’t been consistently bowling in the IPL since it’s resumption.

He is a batsman first and bowling is only a bonus: Virender Sehwag 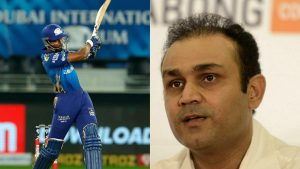 Hardik Pandya hasn’t bowled in the IPL since 2019. He underwent a back surgery after which he was never the same as before. But according to Indian selectors, Hardik is fully fit and will bowl his quota of overs in the IPL. Hardik even missed the first couple of games for MI due to an injury.

Former Indian cricketer Virender Sehwag recently expressed his opinion on this issue. According to him, Hardik can be included as a pure batsman in the side. Sehwag believes that Hardik Pandya is a match winner with the bat and he will find a place in his side even if he is not fit to bowl.

“Hardik Pandya alone can win you matches. He is a batsman first and bowling is only a bonus. Even if he is not fit enough to bowl, he can win matches with the bat. I will always keep such a player in my team,” said Virender Sehwag while speaking to Cricbuzz.

Virender Sehwag’s commentary partner Ajay Jadeja shared the same thought as he reckons that Hardik has the skills to play in the middle overs. He feels that Mumbai Indians should send him up the order so that Hardik can further grow. Hardik Pandya was sent at no. 7 against RCB which was his first IPL game in this leg.

“If a batter has to grow, he has to be sent up the order. Now he’s shown he can do this while coming in early. He has the skills to bat in the middle overs. Wondering why Mumbai Indians are not sending him up the order,” added Ajay Jadeja.

Hardik Pandya recently played a match winning innings of 40 not out against Punjab Kings. MI were in a precarious position during a tricky chase but crucial runs from Tiwari and good finishing from Hardik Pandya took them over the line. Hardik Pandya finishing the innings was a good sign for team India as he looked rusty in the first game against RCB.

ALSO READ: INZAMAM-UL-HAQ CLARIFIES THAT HE DIDN’T SUFFER AN HEART-ATTACK