MS Dhoni is one of the few Indian cricket heroes for whom fans would go to any extent to catch a glimpse of him. His fan following is immense and one has to do something extraordinary to stand out among the rest. 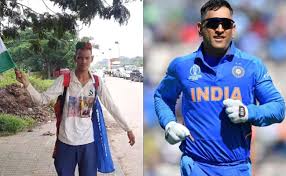 One such extraordinary feat was pulled off by a fan from Haryana named Ajay Gill walked 1436 Kms to reach Ranchi and catch a glimpse of his hero MS Dhoni. This is the second time Gill walked on foot to Ranchi to see the MS in the last three months. The last time he came to Ranchi, it took him 16 days while this time, he completed his journey in 18 days. According to reports, MS Dhoni not only met him but also invited him inside his farmhouse and gave him an autograph. The arrangements of Ajay’s stay were well made by Dhoni only inside his farmhouse. The CSK skipper made sure that his fan reached his home all well and arranged the flight tickets of Haryana for Gill.

Reportedly, in the conversation that took between the two, Gill told MS that he wishes to represent India one day and that he had been playing in his hometown. However, Gill stopped playing cricket post-MS Dhoni’s international retirement in August 2020. However, he stated that he would like to begin playing cricket once again after taking the blessings of his hero.

MS Dhoni blessed him and clicked a selfie with him which is already doing rounds on the internet. Speaking of Ajay Gill, he has cleared his class 12th examination and works as a barber in his city but wishes to represent India one day in the future.

MS Dhoni is currently on a break from professional cricket after a long season in UAE. He led CSK to a title-winning performance and also mentored Team India in the ICC T20 World Cup.

• Dhoni greeted his fan and arranged his stay