Cheteshwar Pujara and Ajinkya Rahane have not been enjoying a rich run of form off-late which is affecting the state of Indian batting in test cricket. Their flop show continued in the second test at Wanderers against South Africa as team India bundled out for 202 after a steady start. The middle-order looked fragile as no other batter, apart from KL Rahul and Ashwin could withstand the Proteas attack.

The focus is more on Cheteshwar Pujara and Ajinkya Rahane as the two veteran players have not been consistently performing. Unfortunately, there no were signs of improvement in this test either as Cheteshwar Pujara faced 33 balls and scored only 3 runs. Rahane, on the other hand, bagged a golden duck; for the first time in Test cricket.

Long rope given to them is slowly burning out: Karthik on Cheteshwar Pujara and Ajinkya Rahane 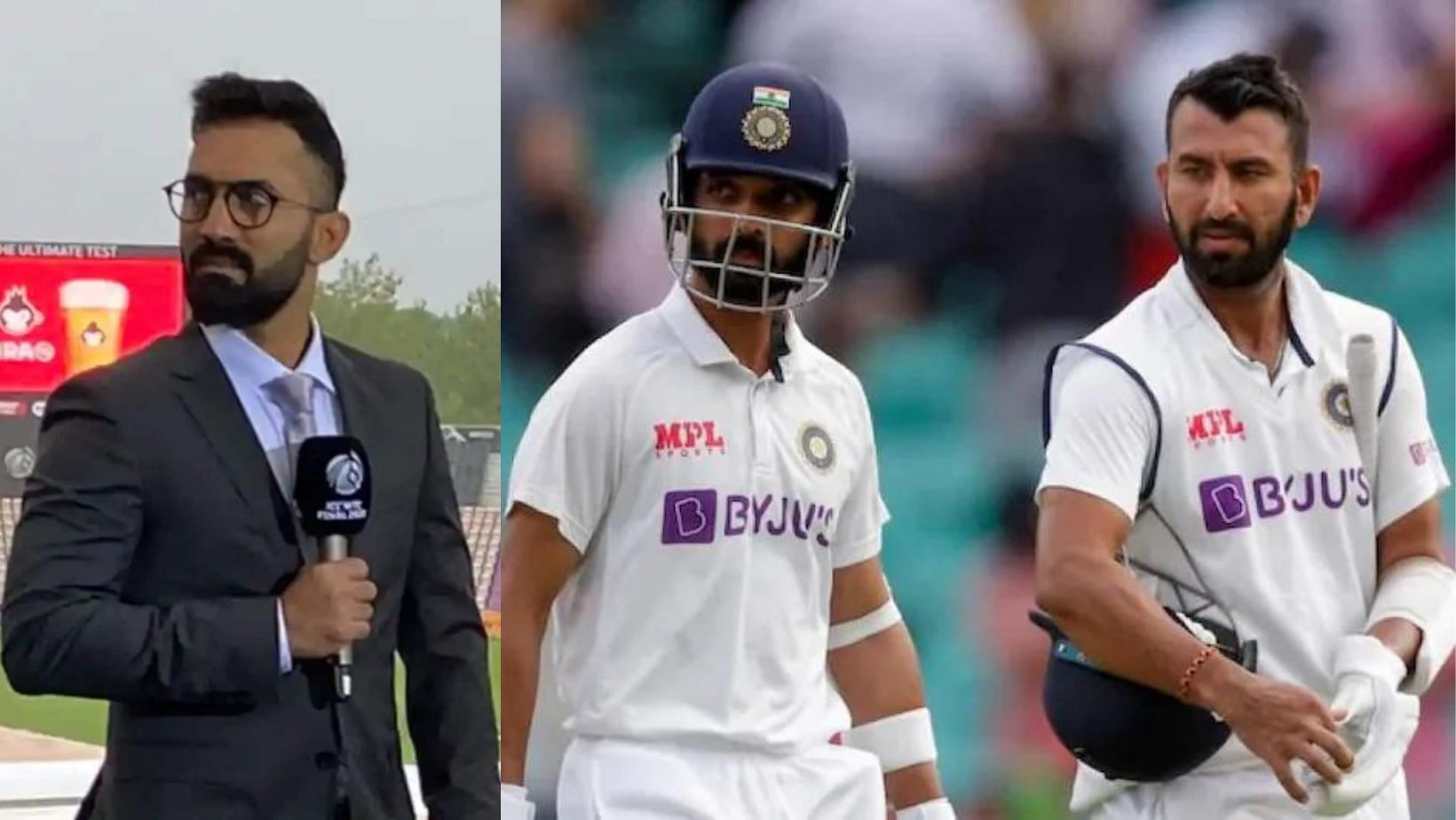 Expectedly, the duo faced backlash from social media and from cricketers as well. Indian wicketkeeper-batsman Dinesh Karthik opined that the ‘long rope’ given to India’s two senior middle-order batters is burning down slowly and nearing its end.

“At No. 3 is inarguably the world’s best cricket team, to find a spot there for three years and not score a hundred – he (Pujara) will know he’s got a long, long rope. To a large extent they are playing because of the potential they have, and the performances they have shown, and obviously, they are senior statesmen [in the team] as well.

But the long rope they have been given is slowly burning out and you are coming to the end of it. I am very, very sure that they are both aware of it. Also, we have got to see the potential of the players at the back, they have done as well. Now if Virat Kohli returns, you get a feeling that one of the two has to give way,” Karthik told Cricbuzz.

The India wicketkeeper-batter further stated that head coach Rahul Dravid won’t hesitate in making harsh decisions on the Rahane-Pujara duo if they keep on failing to score.

“When Rahul Dravid was at the fag end of his career, it was actually Pujara who came in and did well at that No. 3 spot, put pressure on him to eventually take his spot… Obviously, that circle comes around. I do think Rahul Dravid will have to make a couple of harsh decisions and if that means dropping one or both of them, he’ll be open to it because he knows that they have been given a long rope before… You don’t want to set the ground ablaze by making the big decisions right at the outset so I think he’s waiting and trying to assess what he can contribute to their careers and if it’s not meant to be, it’s not meant to be,” Karthik concluded.

• Dinesh Karthik reckons Dravid will have to drop either Rahane or Cheteshwar Pujara when Kohli comes back.

• Karthik states that the long rope given to the Senior batters is burning down slowly.