Watch: Deepak Chahar almost pulls off an R Ashwin in the 3rd ODI; gives a warning to the non-striker

Deepak Chahar made his return to international cricket in the ongoing three-match ODI series against Zimbabwe and returned with a match-winning performance. He was awarded Player of the Match for his tremendous opening spell. Chahar was rested for the 2nd ODI but he returned to the side in the 3rd game.

After setting the hosts a target of 290 runs, a moment of slight controversy took centre stage in the second innings when Deepak Chahar supposedly refrained from running out the non-striker, the Zimbabwe opening batter Innocent Kaia for backing up too far. 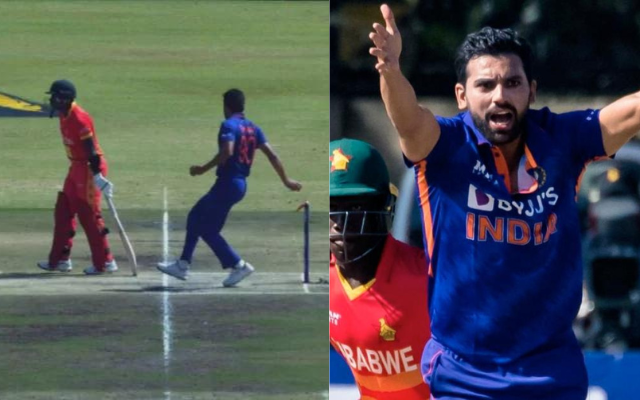 The incident occurred when India’s star opening bowler Deepak Chahar flicked the bails off post his run-up as Innocent Kaia had meandered out of the crease before the ball was delivered. Although the returning Indian pacer disturbed the bails, he did not appeal to the umpire for a possible run-out. Deepak Chahar made amends by dismissing the batter in the next over.

The netizens took notice of the incident and were quick to draw parallels with veteran Indian spinner Ravichandran Ashwin.

Earlier this year, the MCC stated their stance on the controversial rule saying, “The bowler is always painted as the villain but it is a legitimate way to dismiss someone and it is the non-striker who is stealing the ground. It is legitimate, it is a run-out and therefore it should live in the run-out section of the laws.”

Speaking of the game, KL Rahul, the stand-in Indian skipper, won the toss for the third consecutive time in the series but decided to have a bat this time, unlike the previous two occasions where he chose to bowl first. India posted a competitive total of 289 runs on the board in their 50 overs after a sedate start from the Indian openers, Rahul and Shikhar Dhawan.

But it was the 140-run-stand between Ishan Kishan and Shubman Gill for the third wicket that propelled the Indian innings with the latter registering a magnificent maiden century for the Indian team.

• Deepak Chahar attempts to Mankad the non-striker during the 3rd ODI.

• Chahar dismissed the batter in the next over.

Watch: Virat Kohli leaves for UAE ahead of the Asia Cup 2022

Prateek Kumar
Previous article
Watch: Virat Kohli leaves for UAE ahead of the Asia Cup 2022
Next article
4 current Indian stars who made their debut in Zimbabwe