The Instagram page of Cricket South Africa congratulated Lungi Ngidi who is a part of CSK which recently won the IPL title. Interestingly, the Insta handle completely ignored Faf Du Plessis and Imran Tahir who are also an integral part of CSK. Faf played a title winning knock in the final and won the player of the match award.

Cricket South Africa put out a post, captioning: “Congratulations @lungingidi on claiming the 2021 IPL title with Chennai Super Kings.” Interestingly, Lungi did not feature in any games in the second leg of IPL which took place in UAE. 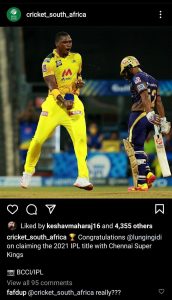 Expectedly, the post did not go down well with South African cricketers Faf du Plessis and Dale Steyn.  Faf Du Plessis, who emerged as the second-highest run-scorer of the season, scoring with 633 runs for CSK, replied saying: “Really???” CSA have now taken down the post after the criticism. 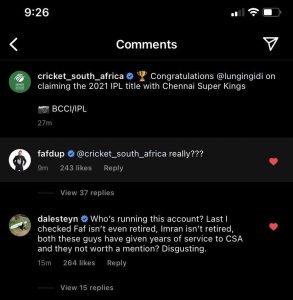 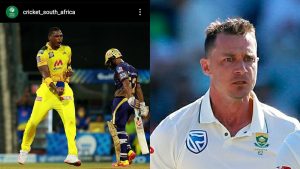 Steyn then slammed the social media handle of CSA. “Who’s running this account? Last I checked Faf isn’t even retired, Imran isn’t retired, both these guys have given years of service to CSA and they were not worth a mention? Disgusting,” replied the former SA quick.

Steyn also took to twitter to give Cricket South Africa a dressing down. “CSA opening a can of worms for themselves with their Twitter and Instagram. Whoever’s running those accounts needs a talking too,” tweeted Steyn.

CSA opening a can of worms for themselves with their Twitter and Instagram.
Whoever’s running those accounts needs a talking too.

“CSA now blocked the comments section. Here’s some advice. Do the right thing. Delete the post and add all the men involved, save yourself the embarrassment and ridicule,” he added.

Here’s some advice.
Do the right thing.
Delete the post and add all the men involved, save yourself the embarrassment and ridicule.

To everyone’s surprise, Cricket South Africa did not pick Faf and Imran Tahir for the T20 World Cup in UAE and Oman despite them being proven match winners. Du Plessis, who retired from Test cricket earlier this year to focus on white ball cricket, missed out of a central contract by CSA and it is reportedly believed that him missing out of the T20 WC bus is related to it.

Now, CSA have posted a new picture congratulating every South African who was a part of the winning CSK team. They also gave a special mention to Faf for his match winning performance in the finals.

• Dale Steyn slams CSA for not respecting their veteran players

ALSO READ: I STILL HAVEN’T LEFT BEHIND: MS DHONI ON HIS LEGACY
- Advertisement -

Prateek Kumar
Previous article
I still haven’t left behind: MS Dhoni on his legacy
Next article
Top five performers in the playoffs week of IPL 2021