India’s tour of the UK started with a bang after Bhuvneshwar Kumar, a veteran Indian bowler, displayed an exhibition of swing bowling in the powerplay. Bhuvneshwar has been a phenomenal performer with the new ball and the veteran cricketer has now become the highest wicket-taker in the powerplay in T20Is. Did Bhuvneshwar Kumar really bowl a ball at 200+ kmph? 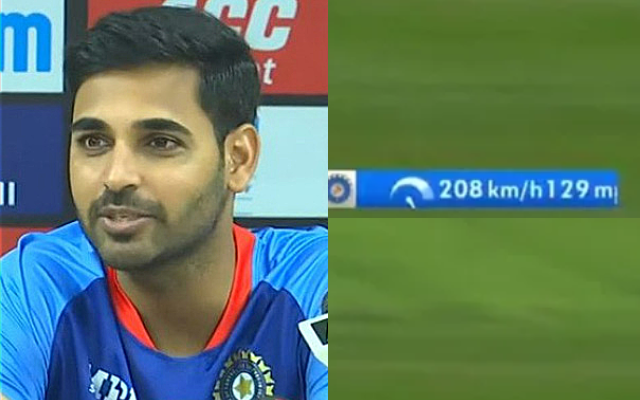 During the 12-over-a-side match in Dublin, Bhuvi bowled an exceptional first spell. However, what caught the Netizen’s eyes was that Bhuvneshwar bowled a ball in the first over which the speedometer showed at 201 kmph. It is worth noting that former Pakistan pacer Shoaib Akhtar holds the record for the fastest delivery bowled in international cricket. He had clocked 161.3 kmph.

Ireland won the toss and opted to bat first. Paul Stirling and Andrew Balbirnie opened the innings. Stirling faced the first ball of Bhuvneshwar Kumar, which left everyone perplexed as the speed gun showed that the delivery was bowled at 201 kmph.

While it was a clear case of an error from the speed gun, it gave netizens a chance to have some fun. Here are some of the reactions:

Captain Rohit Sharma knows how to bring the best out of their players.
Bhuvi is unstoppable since that incident. #IREvIND pic.twitter.com/0YcxXHbw0H

Bhuvneshwar Kumar was bowled at 200+ KPH during the 1st T20 against Ireland at Dublin. #IREvIND pic.twitter.com/ZnIJAHYf1z

Talking about the game, it was Harry Tector’s 64 not out off 33 that helped Ireland reach 108/4 in the allotted 12 overs. Bhuvneshwar Kumar, Hardik Pandya, Avesh Khan and Yuzvendra Chahal shared a wicket apiece.

In return, India reached home with seven wickets in hand and 16 balls to spare. Deepak Hooda led the scorers’ chart with an unbeaten 47 off 29, laced with two sixes and six fours. Ishan Kishan (26 off 11) and Hardik (24 off 12) also helped the team’s cause.

India and Ireland play the second and final T20I at the same venue on June 28.

• A glitch in the speedometer measures Bhuvneshwar Kumar’s ball at 201 kmph.