IPL 2022 has not been a season to remember for the five-time champions Mumbai Indians as they are winless in their first six games in the season so far. This can be attributed to the poor auction they had this year where they failed to pick any prominent bowler and have left Jasprit Bumrah alone in the bowling lineup.

With zero points in their kitty, the Rohit Sharma-led side is reeling at the bottom-most spot on the points table. Now the most successful team will face off against Chennai Super Kings, who are also having a poor season.

“To bee or not to bee”: Bees interrupt training session of Mumbai Indians 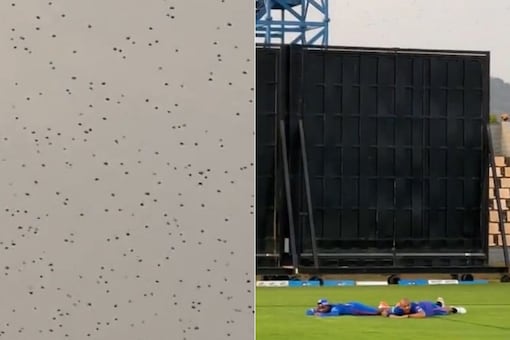 Ahead of the much-anticipated face-off, the men in blue and gold hit the training session but it was halted for some time as some unexpected guests showed up.

MI’s net session was obstructed by a swarm of bees on Tuesday. As soon as the insects surmounted the venue, the Mumbai players and coaching were forced to lie down on the ground. The video of the incident was shared by the franchise on social media.

“To Bee or Not to Bee in training was a question yesterday!’: Mumbai Indians captioned the video.

To bee or not to bee in training was a question yesterday! 😅🐝#OneFamily #DilKholKe #MumbaiIndians MI TV pic.twitter.com/qaTaHjjca6 “There has to be a collective effort and that is what we are looking for. A couple of things that I am saying that we can rectify are putting in a collective effort. You could have seen some special overs from some of our bowlers in the past but then we are not putting it all together as a unit. So, the discussions are how to do it as a team, and how to do it as a bowling unit,” Unadkat said at the pre-match virtual press conference.

“Discussions for death overs or power-play remain the same, we got to do it as a collective unit and that is one thing we are aiming for and hopefully we will get it right in the next game,” added the left-arm pacer.

• MI has failed to win a single game this season.