BCCI to facilitate World Cup-winning India U19 team in Ahmedabad

Yash Dhull-led India U19 team created history in West Indies as they won their fifth World title, which is the most by any team in the history of the competition. After the win, BCCI Secretary Jay Shah announced that the youngsters would be receiving a cash prize of INR 40 lakh each and also INR 25 lakh reward for every support staff member. 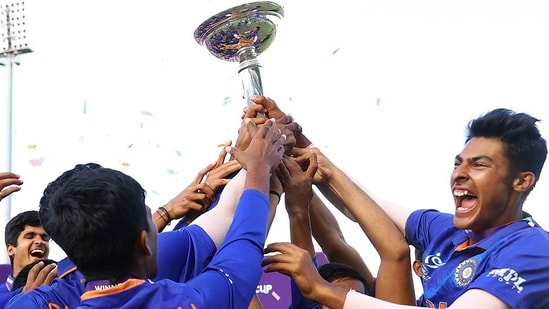 However, the celebration doesn’t stop here for the young champs as the BCCI has also decided to felicitate the upcoming and rising stars upon their arrival in India. It is understood that the team called on the Indian High Commissioner to Guyana after their win over England. But they didn’t get much time to celebrate their success as their long flight back home was scheduled on Sunday evening from Guyana.

World Cup-winning India U19 team to be facilitated upon their arrival: BCCI Official

A BCCI official, however, confirmed that the players will get some time to rest before the felicitation will take place. The date is yet to be finalized as the youngsters have to go through a long haul with connecting flights from Amsterdam and Bangalore before finally landing in Ahmedabad where they will be felicitated. However, it is not yet known if the U19 players will get to interact with the senior team cricketers who are also in Ahmedabad playing the ODI series against the West Indies.

“It has been a hectic schedule for the boys who have little time to rest. They will get some rest after they land in India,” a BCCI official said according to Times Now.

Proud moment for India: Yash Dhull is elated after winning the title Yash Dhull edged his name in history forever as he joined the elite list of Virat Kohli, Mohammad Kaif, Prithvi Shaw, and Unmukt Chand as India’s World Cup-winning captains. Coincidentally, three out of the five captains hail from Delhi.

After winning the final, skipper Yash Dhull was all praise for the support staff of the team who helped the youngsters stick to their basics during their campaign. Hrishikesh Kanitkar was the head coach of the team while Sairaj Bahutule was also part of the staff. Former India cricketer and current NCA Chief VVS Laxman also traveled with the team to the Caribbean.

“Proud moment for India, that we have managed to achieve this. It was difficult at the start to get the combination right. but as time went we became a family and the team atmosphere was good. A great moment to be playing under this lot of support staff,” Dhull said in the post-match presentation.

• BCCI to facilitate the India U19 team upon their arrival in Ahmedabad.

• India U19 team won their 5th World Title in West Indies on Saturday after beating England by 4 wickets.