Pakistan skipper Babar Azam and the-then Indian T20 skipper Virat Kohli had a conversation that was camera captured during the ICC Men’s T20 World Cup. They were seen having a chit-chat before the toss for the highly-anticipated clash between the arch-nemesis on 24th October. They also spoke after Pakistan emerged with a historic triumph against the Men in Blue in that game. Recently, Babar Azam was asked regarding the conversation he had with Kohli but the Pakistan skipper came up with a savage reply.

Babar Azam says he will not reveal the discussion with Kohli 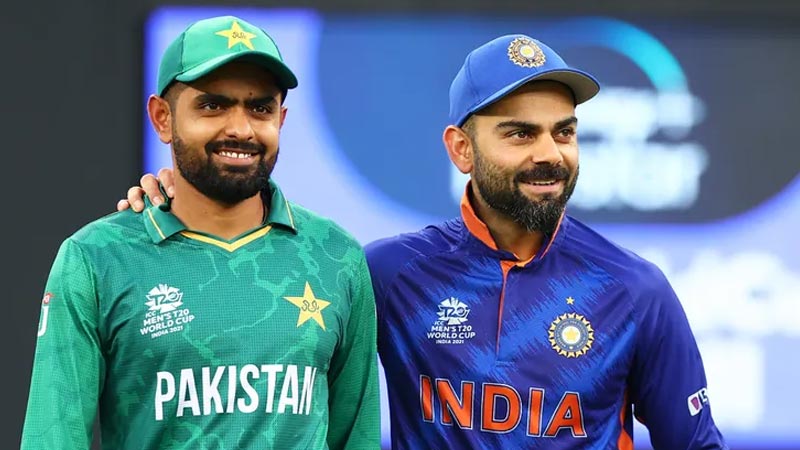 Babar Azam as quoted by Samaa TV, when he was asked about what the two cricketers spoke about before the toss: “I won’t reveal the discussion in front of everyone.”

As far as the match is concerned, it was the Pakistan side that came out on top with a dominating victory against the former T20 WC Champions. The ‘Men in Green’ absolutely decimated the Indian side with 10 wickets to spare, and recorded their first-ever World Cup win against their arch-rivals.

India came on to bat first and posted a competitive total of 151, with skipper Virat Kohli leading the way with a refined 49-ball 57. However, the Pakistan side made light work of the chase and chased down the target in a comfortable fashion.

The Pakistan openers, Mohammad Rizwan and Babar Azam destroyed the Indian bowling attack, as Pakistan reached the target score with all 10 wickets in their hand. Both Rizwan and Azam tallied half-centuries.

India had a forgettable outing in the 2021 T20 World Cup and were knocked out of the mega event in the Super 12 stages of the tournament. On the other hand, the Pakistan side qualified to the knockout stages of the competition, where they were beaten by eventual champions Australia in the semi-finals.

Babar Azam was the leading run-scorer of the 2021 T20 World Cup and had 303 runs to his name in 6 innings, with an excellent average of 60.60. He also scored 4 fifties in the tournament as well.

While speaking about Kohli, he was recently sacked from the captaincy role in the limited overs by Board of Control for Cricket in India(BCCI) after giving a 48-hour ultimatum and named Rohit Sharma as his replacement.