Virat Kohli led-RCB scripted a comeback with a stunning victory over defending champions Mumbai Indians. RCB finally ended their losing streak in UAE and this season. On the other hand, Mumbai Indians problems have multiplied as the five time champions sink to seventh position. 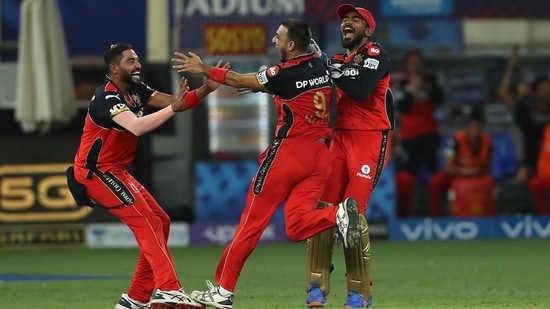 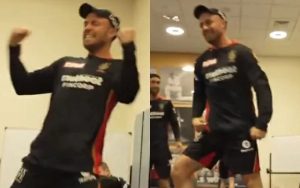 RCB were not off to a great start as they lost Devdutt Padikkal in the second over. However, captain Virat Kohli and KS Bharat stitched up a crucial partnership. Virat Kohli brought up his second consecutive fifty but couldn’t finish things off as he normally does.

After Kohli and Bharat, spectators witnessed Maxwell and Ab de Villiers’s show as both of them tore apart the MI bowling lineup. But Jasprit Bumrah’s amazing 19th over stopped them from further damaging MI. RCB set a target of 166 which was a par score.

MI were off to a flyer as both Rohit and de Kock made full use of the powerplay. However, MI’s batting lineup collapsed in front of Chahal’s leg spin and Harshal Patel’s variations. MI were bundled out for 111 and RCB won the match by 54 runs.

On Monday morning, RCB’s Twitter handle uploaded a special after the match video where the players are seen celebrating the win. As a part of celebration, AB de Villiers, RCB’s mainstay for more than a decade, imitated Kohli’s celebration. The South African legend throws his hands and punches the air while showing his emotion and passion. De Villiers gave his captain a warm hug and then copied his style of celebrating inside the dressing room.

Virat’s pep talk before the match, Yuzi, Maxi & Harshal talking about their performances, Coach Hess & Virat addressing the team after the match, & an AB special to sign off on a comprehensive victory, all that & more on Game Day!#PlayBold #IPL2021 pic.twitter.com/4bH4PIUeKe 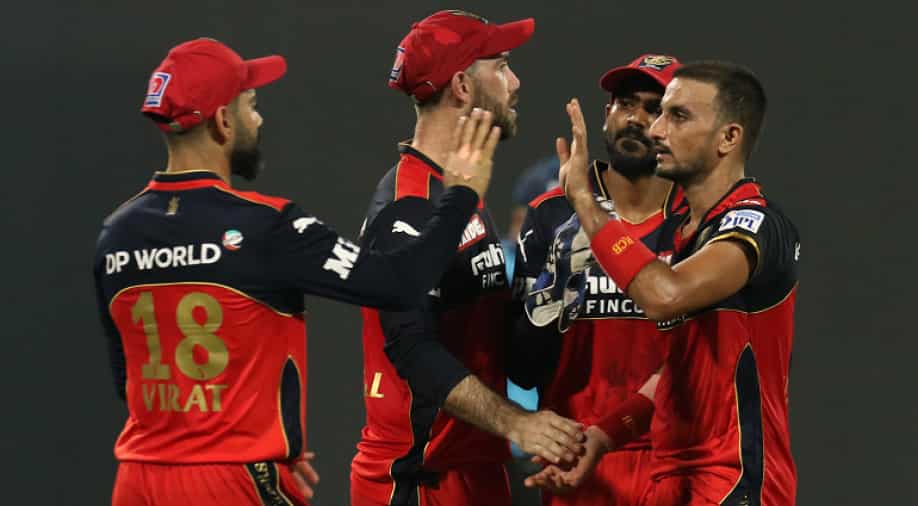 After the match, Virat stated that he thought 166 was a par total but there was always a threat looming given the strong batting lineup that MI has. But the skipper was pleased with his bowlers as they executed their plans well and restricted MI to a meagre total.

“It was a difficult start with the loss of Devdutt [Padikkal] in the second over. The way Jasprit [Bumrah] bowled that over, totally set the game up for MI. It was important from thereon for us to stamp our presence in the game and take a little bit of risk,” Virat said after the game.

“I thought we got par, 166 is par here, still felt like 10-15 more with the way we bowled. 8 for 30 was unbelievable against such a strong batting lineup,” he added.

Virat also gave a special mention to experienced campaigner Dan Christian who was included for this match. Christian is also named in the Australian squad for the upcoming T20 World Cup in UAE.

“I had a chat with AB and Maxi, they told me to go with my gut feel. My gut feel said DC [Christian] is an experienced campaigner, he still has got a slower bouncer in there which could be a wicket-taking option,” Virat added.

• RCB beat MI twice in a season for the first time

Prateek Kumar
Previous articleZaheer Khan reacts after MI lose three games in a row
Next articleThe players can get mentally disturbed: Shami opens up on playing in bio-bubbles